It’s been a while… SORRY!

A lot has happened since I wrote my last movie reaction post. Most notably, I had a baby! And with a new baby comes a lot of movie watching and Netflix bingeing while nursing. (Hello, sore back and 5 seasons of Dexter!)

I had recorded “Caddyshack” on our DVR months ago from AMC and lucky for me it came with “Story Notes”. This was a pretty fun way to watch the movie for the first time, so I thought I’d share some of my favorites (with GIFs of course!) with you:

1) When director Harold Ramis met Bill Murray, in the early seventies, he was working the concession stand at a golf course.

2) Murray was only on set for six days, and his character, Carl, had no scripted lines. Ramis would just leave the camera on him and let it roll.

3) The gopher scenes were shot way after the film had wrapped to try to tie the movie together. The studio paid over $500,000 to add the mechanical critter to the film.

4) The production designer says the pool “was a dump, full of sludge, slime, and other stuff.”

5) Murray and Chase were not friendly off set. In fact, they once came to blows backstage at “SNL”. But when it came time to film, they acted like complete professionals.

6) During filming, Dangerfield thought he was “bombing” because no one was laughing. Someone finally explained to him that if people laughed it would ruin the take.

7) The production built a fake green between two courses to blow up. Then they sent the golf-course staff to a party and secretly blew it up while they were gone.

8) Dangerfield’s character was based on a guy in New York who had sirens on his car.

9) Golf writer Ron Green Sr.: “Everyone was talking about “Caddyshack” at the golf course, and a lot of people started using the lines right away. It just struck a chord with golfers.”

10) “Caddyshack” was created by most of the same team behind 1978’s comedy smash “Animal House”. The goal was to do the same thing all over again. 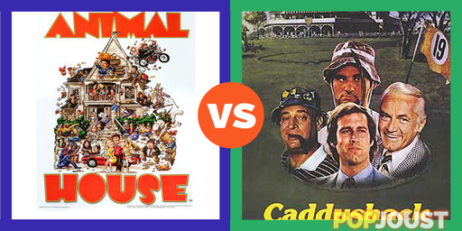 Welp, it looks like I’m going to have to watch “Animal House” now… And TBH, Canyon and I hope it’s a bit funnier than “Caddyshack”.

One thought on “Well, We’re Waiting…”